Liverpool extended their unbeaten home league run at Anfield to 38 games after beating Spurs 2-1 and Chelsea 2-0 in successive home games. Just as it had been in the Merseyside derby, the Reds’ title hopes were brought back on track thanks to an error from the opposition goalkeeper- in this case Spurs’ World Cup winning French captain Hugo Lloris. The 32-year spilled Mo Salah’s header straight onto the body of teammate Toby Alderweireld, who was helpless as the ball deflected off him and back into goal. 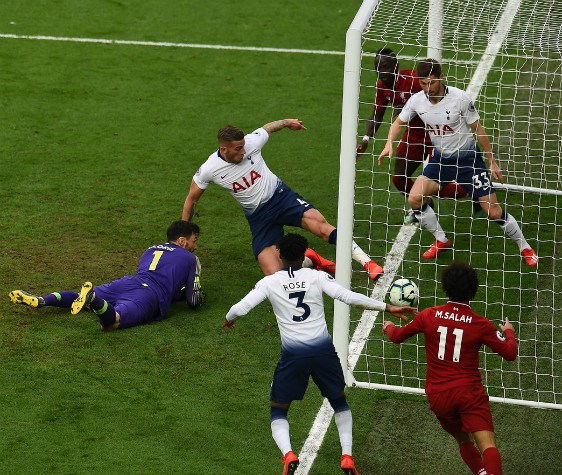 The victory saw Jurgen Klopp’s men complete a league double over Spurs- they had triumphed 2-1 at Wembley in September, and kept them two points ahead of Manchester City in the league table.

Spurs started off with a 5-3-2 and that formation allowed Liverpool to attack and find gaps at will during the opening quarter of the game. Mauricio Pochettino had chosen a back three of Sanchez, Alderweireld and Vertonghen, with Rose and Trippier as wing backs. The latter was caught ball watching for the first goal, with Andy Robertson afforded too much time and space which allowed the Liverpool left back to place an inch perfect cross for Firmino to nod in.

To his credit, Pochettino made tactical changes when it became evident that his 5-3-2 seemed unequipped to take on Liverpool’s 4-3-3. He first switched to a 5-4-1, which reduced Liverpool’s control over the game, and then went to a 4-4-2 after the interval- a move that paid rich dividends as the Lilywhites dominated the second half.

Lucas Moura equalized for Spurs following a quickly taken free kick from Harry Kane and just as it seemed the visitors had done enough to come away with a point from Anfield, Lloris’ error revived Liverpool’s title hopes. The good folks at AmazingBet had predicted a Liverpool win, with both teams to score, and that’s precisely how this game finished. Can Liverpool win their maiden Premier League title? We think they probably can, according to latest predictions, but there are a couple of issues they need to take care of towards the business end of the season.

The Dutchman has been worth his weight in gold for Liverpool since his move from the South Coast. On Sunday, he defended a 2 on 1 that Spurs should’ve scored from, and kept his side’s hopes alive. He had a minor ankle issue during the game that he shrugged off, and Reds fans will be hoping that he stays fit till the very end of the season.

The Egyptian hasn’t hit the heights of last season, and it’s effectively left Liverpool with two goal scorers- Roberto Firmino and Sadio Mane. Salah’s goal against Chelsea showed what’s he capable of- when he’s on form, Liverpool look so much better. Given that Klopp’s midfield troika of Henderson, Milner and Wijnaldum are players who do the grunt work, Liverpool are heavily dependent on their forwards for goals. City have a wider range of potential scorers- Aguero, Sane, Sterling and the two Silvas, to name a few, and that sees them better equipped to win the title.