Here are the player ratings from Bayern Munich vs Bayer Leverkusen on 5 March 2022 from well known German newspaper Bild. The game ended in a 1:1 draw, with Niklas Sule putting Bayern Munchen ahead, only for Thomas Muller’s own goal on 36 minutes to put Leverkusen back on level terms.

Goalkeeper Ulreich and goalscorer Sule the highest rated starters for FCB, every other player got a rating of 4 or 5. Demirbay, Aranguiz and Frimpong get the best player ratings among the Bayer 04 players. 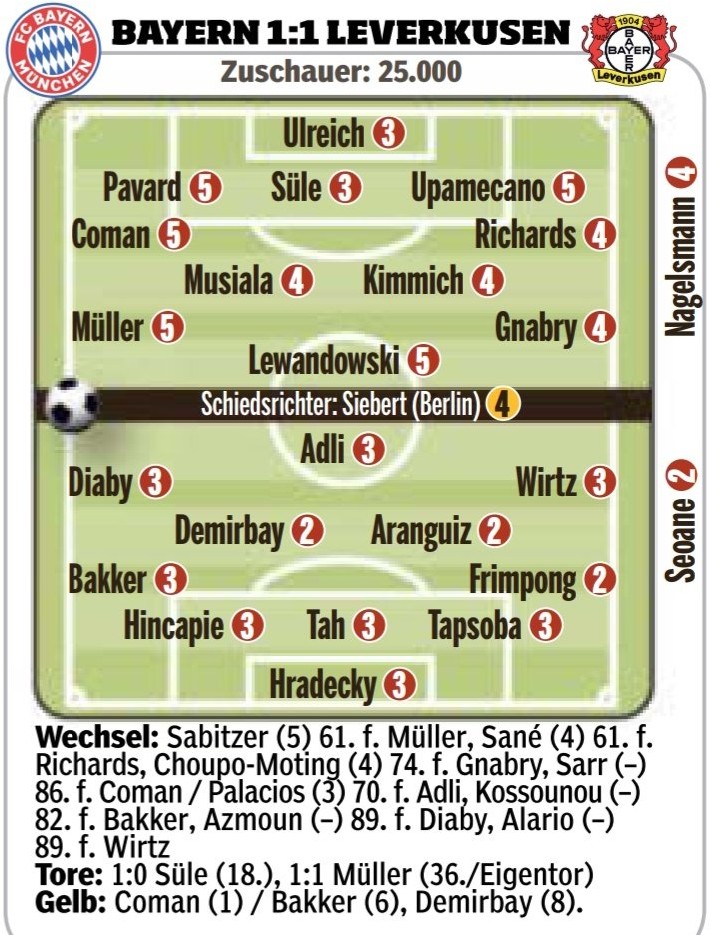 A first half strike from Guido Burgstaller and a late penalty from Nabil Bentaleb saw Schalke beat Leverkusen 2:0 at the Bay Arena and go third in the league.

Burgstaller broke his seven game drought when he produced a cool finish to open the scoring on 11 minutes. Daniel Caligiuri’s long pass found the Austrian international in space, and he deftly lofted it over defender Panagiotis Retsos before slotting home.

Things went from bad to worse for Leverkusen, who could’ve potentially gone second with a win here, when Dominik Kohr was sent off seven minutes before half time.

Schalke finished the job through substitute Nabil Bentaleb’s second half penalty after Retsos had brought down Embolo in the box. The Algerian, brought on in the second half for Leon Goretzka, sent Bernd Leno the wrong way for his fourth of the campaign.

A game to forget for both young Retsos and Kohr, one has to say END_OF_DOCUMENT_TOKEN_TO_BE_REPLACED