No Bayern players in the Bundesliga Team of the Round. We don’t see that happen often, but this weekend was one such occasion, with Niko Kovac’s side producing a lacklustre performance away at Freiburg. The SCF-FCB game ended in a 1:1 draw.

Freiburg did have one representative though, in the form of left back Christian Gunter.

The most dominant team in Game Week 27’s Team of the Round was Hoffenheim, who had three nominations thanks to their 4:1 win over Leverkusen. Ishak Belfodil, who netted a brace was one of them, along with Benjamin Hubner and Kevin Vogt.

Yussuf Poulsen’s hat trick for Leipzig in their 5:0 win over Hertha earned him a nomination alongside Tyler Adams. 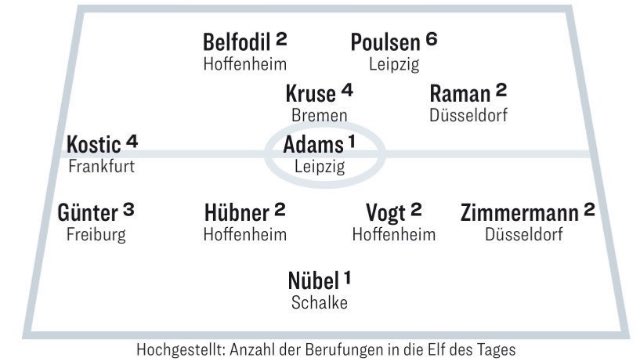