Round 22 of the German top flight was an interesting one- of the nine games played, only two were won by the home side. It was a gameweek of dominance for the visiting teams, and only one game ended in a draw. Here is our roundup of the week.

Not content with his fine performance in the Champions League on Wednesday, Erling Haaland produced another masterpiece on Saturday evening, netting twice, including one goal of the season contender against Schalke in the Revierderby. It took Dortmund around 40 minutes to get going, but only Jadon Sancho netted the opener, there was only going to be one winner in this one. The poor Royal Blues were thrashed 4-0 at home, and remain rooted to the bottom of the table.

Last season, it was Lukas Hradecky in the Leverkusen goal with a blooper, and this time around, it was Niklas Lomb. The Leverkusen keeper failed to connect with an attempted goal kick, allowing Florian Niederlechner to pounce for Augsburg. Thankfully for Bayer 04, Edmond Tapsoba scored an equaliser with virtually the last kick of the match- his first league goal for the club, to pick up a point for them. A disappointing result for Leverkusen, who fall further behind in the title race, but it kept their fine record against Augsburg- Bayer have never lost to them before.

Having been thrashed 5:0 in the reverse fixture earlier this season, few would’ve given Frankfurt a chance against the Bayern juggernaut this weekend. However they stunned the Bavarians 2:1 at home. Some lax tracking back from Leroy Sane saw Daichi Kamada score the opener, and he then turned provider as Amin Younes lashed home a spectacular second. Sane made amends with some trickery as Robert Lewandowski pulled one back, but Frankfurt held on for a famous win. A massive occasion for their UK based supporters to celebrate online at places like here, given the pandemic has restricted more traditional methods of celebrating! 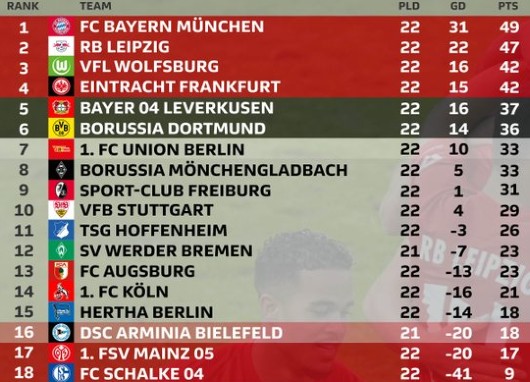 Frankfurt’s win also means Bayern’s lead at the top has been cut to two points, and we seem to have a genuine title race in Germany, unlike England, where Man City seem to be running away with it.

With Bayern having dropped points, it was up to Leipzig to take advantage, and that’s exactly what they did, beating Hertha 3:0 away. The game was set up by an absolute worldie from Marcel Sabitzer. Nordi Mukiele and he had both made mistakes in the Champions League clash against Liverpool and both atoned for it by netting here. Willie Orban also found the back of the net as Leipzig won 3:0

Frankfurt’s win over Bayern was the first home win of this round, and Hoffenheim against Werder was the other. Four different scorers for TSG as they blew Werder away.