“Schalke-Schande” (Schalke Shamed), read German newspaper Bild’s headline after the game, and it was pretty much on point as the Royal Blues were thrashed 7:0 by Pep Guardiola’s men in the second leg of their Champions League tie at the Etihad. Given their domestic woes in the lead up to this game, few would’ve expected Schalke to progress, but even fewer would’ve expected them to capitulate the way they did at the Etihad- the biggest ever defeat for a German side in the Champions League era.

For thirty minutes S04 kept City at bay, but once referee Turpin pointed to the spot after Bruma had fouled Bernardo Silva, the floodgates opened. Aguero scored the first (with a cheeky panenka we must add!), and the goals kept coming. The Argentine scored two, with five different players on the scoresheet for the other goals. City had thrashed Shakhtar Donetsk 6:0 in the group stages, and went one step better here, as they scored 7 against Domenisco Tedesco’s helpless side. 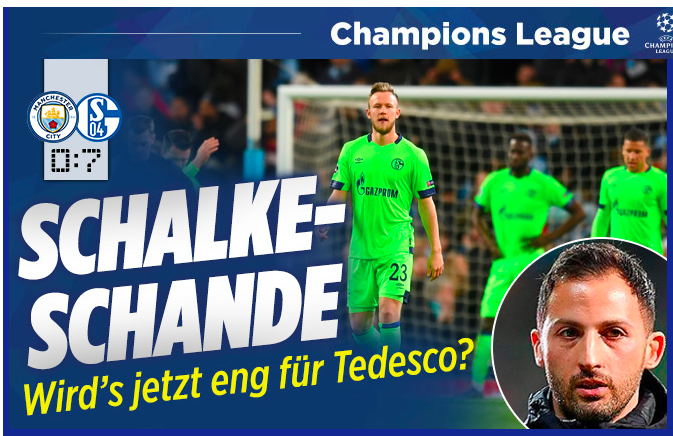 The player ratings for the Schalke team also indicated how badly they were outclassed at the Etihad. (6 is the worst, 1 is the best). The 51.518 City supporters present were treated to an attacking masterclass from their side, who could do the quadruple this season. 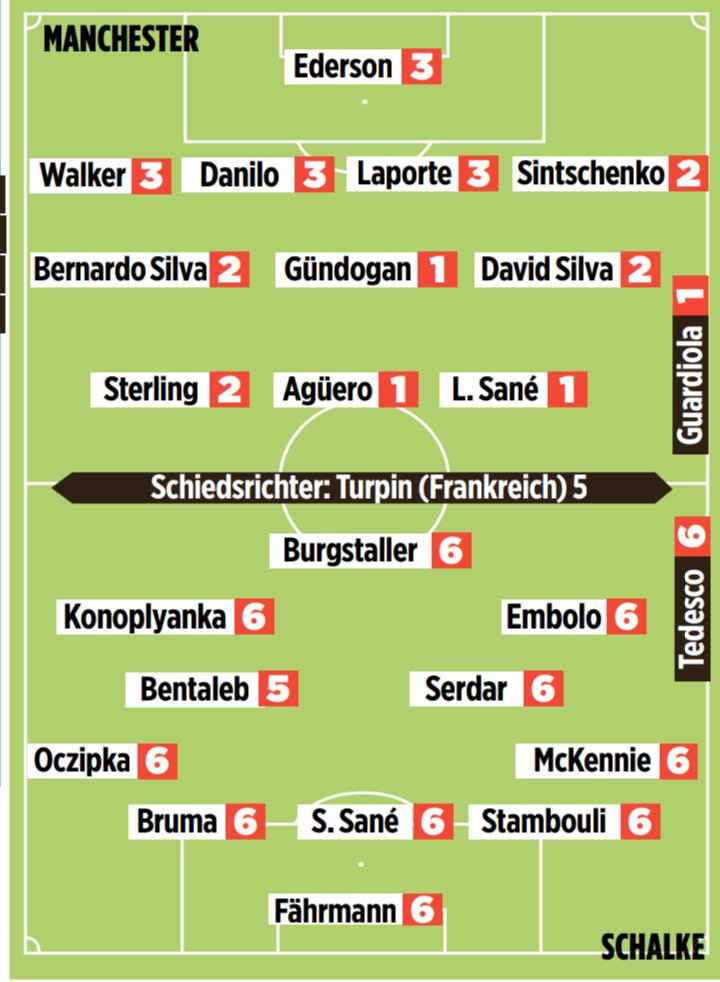 There were only seven goals scored by City, but it could’ve been more. Aguero missed a sitter early on in the game, and Leroy Sane had one disallowed for offside. With 800 passes and over 70% of possession, City might have even crossed double digits if they had so desired. Schalke old boy Sane was imperious against his former club– scoring once and having a hat trick of assists. Most of City’s goals came down the left flank as Schalke’s defence was torn to shreds. Sane and Gundogan, himself a Schalke youth product, both got the highest rating of 1 as did Sergio Aguero and coach Guardiola. Bar Bentaleb, all S04 players earned the “worst” 6 rating, and the same went for coach Tedesco.

How long will he remain at the Veltins Arena? Will defeat in the next round of games against Leipzig force the board to make a managerial change?