Vietnam turned on the style in the second half as they beat Indonesia 4-0 in their World Cup qualifier at the Maktoum Stadium in Dubai. It was the first time in 19 months that the country were in WC qualifying action, but they were comfortable winners, keeping their unbeaten record in the group and handing Indonesia their sixth defeat in seven games in the competition.

The first half was all Vietnam, but the Golden Warriors failed to convert their chances into goals. In previous games in this group, Vietnam had a tendency to find the back of the net before the interval, but were unable to do so here, and therefore both teams went into half time with the score at 0-0.

Six minutes after the interval, Vietnam broke the deadlock through Nguyen Tien Linh. There was a hint of controversy about the goal, with the Indonesian players appealing about a potential handball, but Jordanian referee Ahmed Al Ali was unmoved and the goal stood.

Nguyen Quang Hai’s long range effort on the hour mark put Vietnam 2-0 ahead, and the game was put beyond Indonesia’s reach three minutes later when a corner routine eventually saw Nguyen Cong Phuong score. Van Thanh added the icing on the cake with a stunner on 74 minutes to make it 4-0 for the leaders.

The result takes Vietnam to 14 points in Group G with two games to play. Well known domestic sportsbooks in the country like Vwin already reckon Park Hang-Seo’s men are favourites to win their group. Vietnam’s next games are against Malaysia and UAE, and they have a two point advantage over the latter. 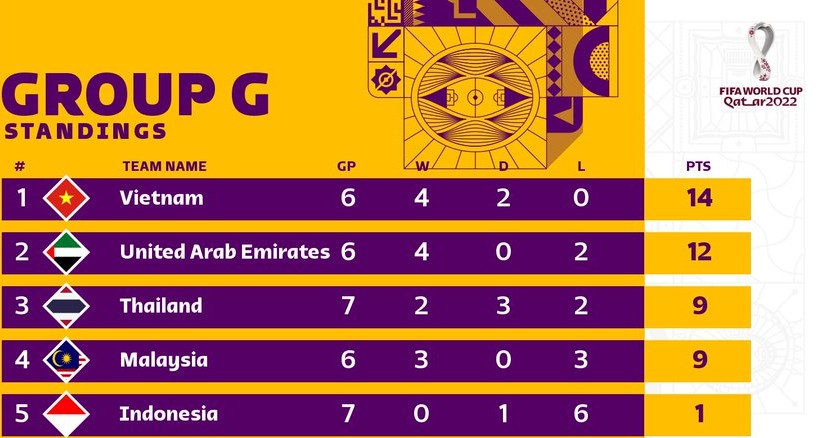 UAE dashed Thailand’s hopes of qualifying with a 3-1 win in the same round of fixtures, avenging their 2-1 loss at the hands of the same side back in October 2019. It effectively makes the Vietnam-UAE clash on June 15 a winners-takes-all clash. Interestingly, both of Vietnam’s drawn games in the group were against Thailand, but they are otherwise yet to lose a game so far. UAE on the other hand have already lost two.

Vietnam actually beat the UAE 1-0 when the two sides met earlier in the campaign in Hanoi. The fixture will essentially pit the best attack in the competition in the form of the UAE against the best defence- Vietnam have conceded only one goal in six games so far.

Vietnam though also have the small matter of having to beat Malaysia in their next game. The UAE have a more straightforward clash against bottom of the table Indonesia, who have struggled in this group, and should ordinarily be fancied to win that one.