We’re now down to the last eight of Europe’s premier club competition and Leicester City are the only English side left. That’s something nobody would have predicted at the beginning of the season, with many expecting the Foxes to be embarrassed in their maiden Champions League campaign.

The quarterfinal draw has given us four intriguing but well matched ties- Leicester v Atletico, Dortmund vs Monaco, Barcelona vs Juventus and the pick of the lot- Bayern vs Real Madrid, a fixture that pits Carlo Ancelotti against his former employers. 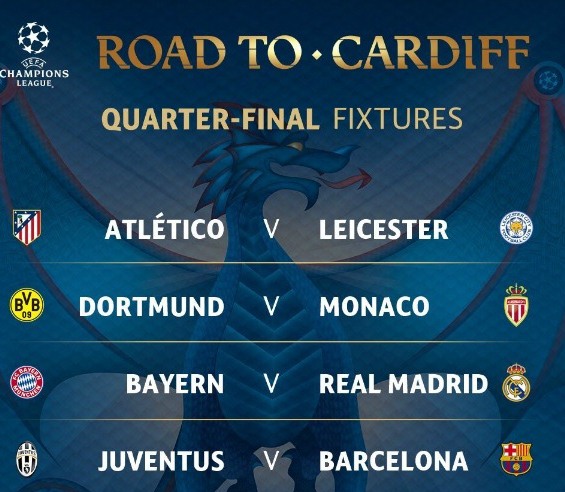 The Bavarians are second favourites behind Barcelona to win the tournament, and prima facie, it’s hard to see how Real Madrid will be able to overcome Carlo Ancelotti’s side in their upcoming quarter-final tie – especially as the latter are in imperious form, having demolished Arsenal 10-2 on aggregate in the last round.

However, a cursory glance at the record books suggests Madrid may have Bayern’s number; the La Liga leaders have defeated the reigning Bundesliga champions in the sides’ last three head-to-head meetings, which include the 2013/14 Champions League semi-finals. Back then, Real were playing under the leadership of current Bayern boss Ancelotti, and the 57-year-old Italian will be keen to get one over his former side when the two clash on April 12.

Domestically, Munich have barely looked touchable this season, and are odds-on in the Bundesliga betting to retain their title. The side’s last domestic loss came at the hands of rivals Borussia Dortmund back in November; the 1-0 defeat remains the only blemish on their record all season.

With 21-goal Robert Lewandowski amongst their ranks, Bayern have opened up what is surely now an unassailable 13-point advantage at the top of the Bundesliga, and while they will undoubtedly be keeping one eye on the chasers below them, the club’s main focus will now turn to the Champions League.

It will certainly help the German champions heading into the quarter-final stages that forward Thomas Muller seems to be re-finding his goal scoring potential after netting in recent victories over Arsenal and Borussia Monchengladbach – although he still has only two goals to his name in the league and his confidence is questionable.

For their part, Real Madrid are seeing similar fortunes in Spain’s La Liga. Although Barcelona are pushing Zinedine Zidane’s men all the way in an effort to reclaim their crown from last year, Real are two points clear at the top of the table with a game in hand. More impressively, they’ve only lost two games in 27 all year, and are running high on confidence after they too managed a rout in the round of 16; taking apart Napoli 6-2 on aggregate, scoring three each both home and away.

Whilst the 2016 Ballon d’Or winner has been somewhat overshadowed by the goal scoring exploits of 2015 winner Lionel Messi this year, Cristiano Ronaldo is still a major part of Real’s success, and he must continue to excel should Real stand a chance of breaking through Bayern’s formidable defence over two legs.

That being said, keeping things tight defensively may well be one of Real’s keys to victory. Bayern were able to play with great width and expansiveness in the second of their demolitions of Arsenal in the Round of 16, with Ribery and Robben on the wings being able to boss the game – particularly after the Gunners went down to 10 men early in the second half. Arsenal compounded their defensive fragility by desperately swamping the Bayern half with players in search of pulling one back, allowing Ancelotti’s men far too many opportunities to sting them on the counter.

Real boss Zidane will have been watching that tie with interest, now knowing that his side must retain their structure and play with patience if they are to continue their run of victories over Bayern. Defensive responsibilities aside, the midfield battle will largely dictate how the game flows, and it is vital that both Ronaldo and Gareth Bale, whose fitness remains a concern for Real fans, step up to the plate – or else Munich may well be given free rein to run roughshod over Madrid similarly to how they clinically dispatched Arsenal.

Germany’s other two continental representatives are Borussia Dortmund, who will take on Monaco in their CL quarterfinal, and Schalke, who will meet Ajax in the last eight of the Europa League.