Everton put their inconsistent run of league form behind them as they knocked Bournemouth out of the FA Cup at the Vitality Stadium. Despite having what many supporters consider to be one of their best squads in the last decade, the Toffees have been lacklustre and are in the bottom half of the league table. However at the Vitality Stadium, their players came to life as goals from Ross Barkley and Romelu Lukaku steered them into the last eight of the Cup.

Toffees manager Roberto Martinez stuck to the same side that had suffered a shock defeat against West Brom, thus giving the XI a chance to atone for their loss against the Baggies. Bournemouth on the other hand, made seven changes, with Eddie Howe clearly prioritising the league over the Cup.

Everton began brightly, but Bournemouth began to impose themselves on the game as the first half progressed and looked set to take the lead when James McCarthy handled the ball in his own area, giving the Cherries a penalty. Up stepped Charlie Daniels, but Spanish keeper Joel Robles, who has replaced Tim Howard as No. 1 at Goodison Park, produced a fantastic save to stop the spot kick.

Bournemouth were made to rue the miss as ten minutes after the interval, Ross Barkley scored his 14th of the season to give Everton the lead. The young medio’s shot had a touch of fortune as it deflected off Dan Gosling and looped past a despairing Federici in the Bournemouth goal. However there was no doubting Barkley’s class in the game as he put in another assured performance to further stake his claim for a starting spot at the European Championships later this summer. 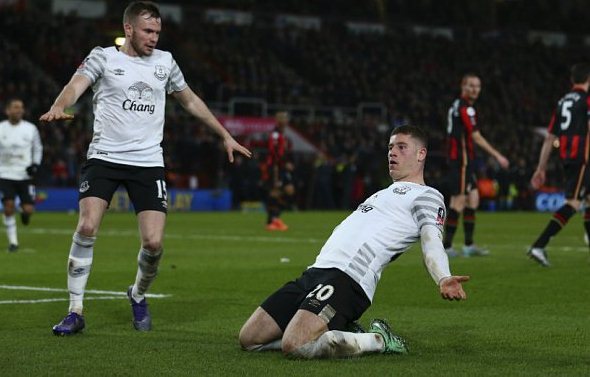 Bournemouth pressed for an equaliser, with Junior Stanislas and Gosling both coming close, but instead it was Everton who scored next. From an Oviedo corner, Romelu Lukaku was the quickest to react to Gareth Barry’s backheel, and he smashed home to put the game beyond the reach of the Cherries.

There was to be no repeat of the the heroic comeback that Bournemouth produced when the two teams met in the league a couple of months ago, when they came from 2-0 down to draw 3-3. Everton had worn their traditional blue kit in the league fixture, but opted for a switch to a white alternate strip for the Cup. Bournemouth retained their red and black home uniform, sponsored by the Mansion Group, the owner of SlotsHeaven and other premium brands.

Everton now have a nice long break before their next clash against Aston Villa, thanks to the Liverpool game being postponed, while Bournemouth must be ready to do battle against Watford this weekend. The Cherries seem to have hit a mini bump with three straight losses after a promising period in which they lost only once in seven outings.

With the Cup now out of the picture, Howe can now solely focus his attention on the league and with important games against fellow drop zone candidates Newcastle and Swansea coming up next month, needs to get his side up and firing again.